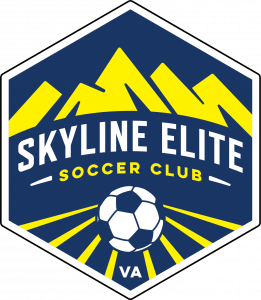 The Skyline Elite Soccer Club origins are based in the former SOCA Elite Travel program (Soccer Organization of the Charlottesville Area).  Over many years the SOCA Elite program established itself as the strongest and most successful youth travel program in the state of Virginia, west of the city of Richmond.  Sustained success of these teams attracted more and more players from surrounding communities outside of Albemarle County.  Organizationally, SOCA merged with Augusta FC in 2015 and began providing soccer programming for not only players in the Charlottesville and Albemarle area but also those in Augusta County, Waynesboro, and Staunton.  This expansion is the foundation which the Skyline Elite Soccer Club builds upon as it serves elite soccer players throughout central and southwest Virginia.

Skyline Elite provides a superior training and player development environment for elite soccer players in the surrounding region.  Players not only benefit from this environment individually, but unite to form teams that compete with programs from dense metropolitan areas of greater population and resources.  Skyline Elite teams compete in the most prominent tournaments and showcase events in the Mid-Atlantic and are a perennial force in league and state wide competitions.  Skyline Elite believes competition is healthy, enjoyable, and essential to player development.  Players compete within their team; teams compete for match success; the club competes in a marketplace of ideas. We seek to challenge ourselves at the highest levels.

Please explore this site to learn more about the club and consider joining our efforts to provide unity, pride, and excellence to the youth of the Skyline region.  Do not hesitate to contact our staff with questions or gain more information on our programming.